On the X Box Backpedal and Digital Distribution 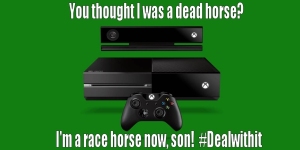 Note: On the second half of the post, I propose a mode for physical and digital distribution of games that, I think, is the most interesting part of the post. If you’re one of the three major hardware companies, feel free to use it. Also, if you’re Steam, feel free to take some ideas from it.

Turns out that Microsoft backpedaled on its decision to implement 24 hour DRM and region-locking the game. As a gamer, I’m fairly OK with this. As a technology enthusiast, I’m also pretty OK with this too. The thing is: I see a future where games are digital-only, but the way Microsoft envisioned it isn’t the optimal way of approaching this. I’m glad they went back on their policy. This still doesn’t make the X-1 a first day buy for me, as I’m really not a big fan of the forced Kinect, but if Microsoft decides to put out a Kinect-free version, THAT would persuade me to make a first day purchase. As it stands, I now see Microsoft as a contender. As it stands, if a few good exclusives come out after the first few years, I would buy the console. I think that a few Lost Odyssey sequels would do it for me. But anyway, that’s an irrelevant rant, really. What I want to write about today is what Microsoft tried and failed to do, and the reasons why it failed so horribly: pushing for an all-digital future.

Let’s start with the message that Microsoft put out versus what, in a best case scenario, Microsoft envisioned and should have said.